B-25 “Maid in the Shade” Arriving at LSRA 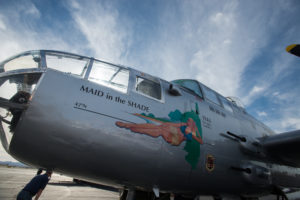 B-25 “Maid in the Shade” Arriving in Oro-Medonte, Ontario
for “Flying Legends of Victory Tour”

Midhurst/June 13, 2018 – One of the most iconic airplanes from World War II, the B-25 Mitchell “Maid in the Shade,” will make a stop in Oro-Medonte, Ontario at the Lake Simcoe Regional Airport, 224 Line 7 North from July 16 to 23, 2018 as part of its Summer Flying Legends of Victory Tour across the U.S. and Canada.

The tour, made possible by the volunteers of the non-profit 501(c)3 Arizona Commemorative Air Force Museum, features three restored WWII combat aircraft: C-47/DC-3 Combat Legend “Old Number 30;” B-17 Bomber “Sentimental Journey;” and B-25 Bomber “Maid in the Shade.” These warbirds and their crews will follow separate routes across the U.S. and Canada and visit approximately 50 cities from May through October 2018 to fulfill their mission of educating all generations about the role of aviation in combat.

The public will have the opportunity to climb aboard the B-25 Bomber to soak in the breathtaking stories of courage and service by Americans during one of the most important periods in U.S. history. The B-25 is one of only 34 in the world that is still flying. The aircraft was used in America’s first large-scale bombing offensive in the Philippines.

The aircraft will be open to the public for tours on Monday, Friday, Saturday and Sunday from 2 to 6 p.m. and on Tuesday through Thursday from 9 a.m. to 6 p.m.  Rides are taking place Friday through Sunday. Reservations are required and can be booked by visiting http://bit.ly/FLOVTBarrieON.

AZCAF was founded in 1977 and is the 10th chapter of the Commemorative Air Force.  It’s comprised of 500 member volunteers and seven flyable warbirds that offer Living History rides. The fully-restored and rare B-17 and B-25 Bombers and C-47/DC-3 Combat Legend conduct the Flying Legends of Victory Summer tour and visit approximately 50 cities throughout the United States and Canada.  The AZCAF has 55,000 square feet of historical airplanes, relics, and educational exhibits, in addition to a working mechanics hangar.  A Trip-Advisor Winner of Excellence, it’s one of the top-rated adventure attractions in Phoenix and regularly conducts tours for schools, businesses, and youth groups.  www.azcaf.org

About the B-25 Bomber

Built in 1944, the B-25 “Maid in the Shade” was developed by North American Aviation and used mainly as a low altitude strafe and skip bomber. Nearly 10,000 B-25s were produced and the B-25 Mitchell “Maid in the Shade” is one of 34 still flying today. The aircraft was used in America’s first large-scale bombing offensive in the Philippines and sunk eight ships and shot down five planes. The B-25 is most remembered for the Doolittle Raid on Japan where Jimmy Doolittle led 16 B-25s across Japan bombing targets. This aircraft has flown 15 combat missions from November 1 through December 31, 1944 including 13 over Italy and two over Yugoslavia.

The Commemorative Air Force (CAF) honors the men and women who built, maintained, and flew in airplanes during wartime. The organization believes that is best accomplished by maintaining these warbirds in flying condition and taking them to people to experience the sights and sounds of these treasured beauties in flight.

Collecting, restoring, and flying vintage historical aircraft for more than half a century, the Commemorative Air Force ranks as one of the largest private air forces in the world. The CAF is dedicated to honoring American military aviation through flight, exhibition, and remembrance. A non-profit educational organization, the CAF has more than 13,000 members and a fleet of 165 airplanes distributed throughout the country to 76 CAF units for care and operation.  There are also four international affiliates in France, Switzerland, New Zealand, and Australia. For more information, visit www.commemorativeairforce.org.

Tourism Simcoe County is funded by the County of Simcoe. We promote area tourism and boost tourism partners, operators and the 25,000 employees working in regional tourism through funding initiatives and support of tourism programs and festivals. Visit our website at experience.simcoe.ca or better yet, visit, and experience amazing for yourself!

Resources:
Photos/B-25 Fact Sheet can be found on our website: https://www.azcaf.org/media-relations/

A complete Flying Legends of Victory tour schedule is available at www.FlyingLegendsTour.com.